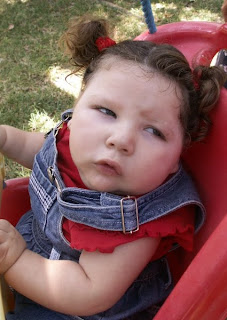 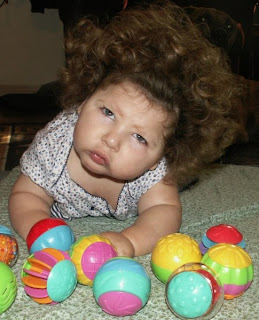 Today Sierra had her very first speech therapy session. It is really more about learning to communicate and do things than it is about talking. The therapist had a toy that makes noise when you touch different buttons on it. She would put Sierra's hands on it and help her touch the buttons. We put Sierra on her right side (the side she doesn't like) and had her play with the toy while on that side. I believe that she was responding to the toy, because she did not even try to roll during the whole therapy session even though she hates being on that side!

Sierra's birthday is next month and I am really wanting to get her some toys that make noise, play music, or have varying textures for her to touch.

Thank you all for your continued prayers. God is continuing to work in the life of this miracle baby!

On Monday Sierra got a cold. She has been pretty congested. When I first saw that she was getting sick, I began giving her Berry Well which is a syrup with elderberries, Bee propolis, Echinacea root extract, raw honey, and raw apple cider vinegar. I was giving that to her about every 3 hours or so and giving her garlic "tea." The garlic did wonders in helping break up the congestion and the Berry Well helped boost her immune system. Of course all the prayers helped as well! She is doing MUCH better today and I believe she is on the mend. Yay! We didn't have to go to the doctor or give her any medicine.

Over the past three weeks or so, we have been seeing a lot more progress! They are all very little improvements but they are improvements nonetheless. Let me see if I can remember them all. She has started using both legs equally. Before, when she was on her belly, she would pull her right leg up under her and push with it, but would hardly ever do that with her left leg. She has begun using her left leg almost as often as her right leg.

Sierra is continuing to do well with her weight bearing. She will stand for several minutes at a time when we hold her up. At church, I lean her against the pew and she can stand without me supporting her.

Her big toes always used to be scrunched up. About two weeks ago we noticed that they weren't scrunched up anymore. They were fully extended! I'm not sure the significance of that...I think it may have to do with her muscles loosening up, I don't know.

We've started noticing some more purposeful movements. Sierra has begun to put her hand up to her mouth. The other day, I put a toy in her hand and then helped guide it to her mouth. After that, she put it in her mouth, by herself about 3 times! It could have been an accident, but I don't think so. She has also shown more interest in touching toys.

Sierra's grandfather made a 12' crawling slide for her. The angle is adjustable. It encourages her to crawl and gravity helps her make progress. She is getting very good at crawling down her slide!

There is a new therapy place that opened here in Temple. We have been to evaluations for speech therapy, and occupational therapy. She will get an evaluation for physical therapy on Monday. We were VERY pleased with the therapists! They were excellent! This therapy place is called Hope Therapy Center. There have a branch in Waco and just opened this branch in Temple. They are eventually going to get aqua therapy and hippotherapy.