The weather here has been very nice. The temperatures have been about like there are at home. Today the high is supposed to be in the 70's and tomorrow it is supposed to be in the 80's. The other day it was nice and warm here. All the poor Yankee's were dying from the heat. We didn't even have our air conditionair on. We had about three different Chinese people come in and tell us that we could turn the air on. They were rather shocked that we did not want to turn the air on. Something that I can't figure out is that 90% of the people here seem to wear long sleeves or a jacket no matter what the weather is like.

I am rather tired of the Chinese food. It is all so greasy. If I am going to eat greasy food, I want it to be something like fries, onion rings, etc. not Chinese stir fry or vegetables. One of the nights we were here I was dreaming that the RT Mart (which is like a Super Wal-Mart) was selling Blue Bell ice cream. It was $10. for a half gallon but I was going to buy some. Then yesterday I was dreaming about good ol' American cheese. They don't eat much cheese here.

We did bring some packaged food. Today I will cook all of our meals here instead of ordering out. We brought some blueberry muffin mix from home. I was going to attempt to make pancakes the other day. My attempt at pancakes was a miserable failure. (They don't have a stove here just a cereamic hot plate that gets way too hot for pancakes). After burning what was supposed to be a pancake, I came up with a clever plan. I took a ceramic coffee mug, poured some batter into it and then put it in the microwave. Ta da! Blueberry blobs! If you closed your eyes and used your imagination, they could almost pass as blueberry muffins. They say that necessity is the mother of invention.

We have gotten a kick out of how the cleaning ladies use the word "hello." Here, if you are Chinese and only know 5 English words, you use those 5 words as much as possible it doesn't make a bit of a difference if you use them correctly or not.. If the cleaning ladies just mopped they wiill say, "Hello, be careful." Jason took some dishes to the kitchen to wash and the woman said, "Hello" and then motioned for him to leave and that she would do them. They tend to use "hello" more as an attention getter than anything. What was hilarious was the other day when one of them was doing hand motions to try to tell Jason something. Neither of us understood what she was trying to say. So Jason said to her, "Hello" and motioned for her to follow him. He took her to someone who did speak English and got them to translate.

We have been forewarned that it is very common for children who have had seizures in the past (even if they haven't had them for years) to have a few seizures after the Stem Cell Treatments. They explained why this was the case and it made sense, but I don't know if I can explain. Apparently when the stem cells get to the brain, they cause lots of activity. All that activity can sometimes be overload at first for a kid who has had seizures. Thus initially it causes more seizures. However, in the long run, it reduces the seizures. A mom here was telling us that her daughter usually has several seizures every day. She had some pretty bad seizures eight hours after the lumbar punctures, but now that she has finished all of her treatments they have seen a reduction in seizures overall. In a way it is an indication that the stem cells are getting where they need to go.

Apparently the lumbar punctures are more likely to increase the chance of seizures than the IV because the stem cells have a direct route to the brain. We still don't know if Sierra will be getting lumbar punctures or not. Today she receives her second IV. We are hoping that she will be able to get some lumbar punctures because they are more effective. At the same time, we are a bit apprehensive about her having seizures. We know that if she does have any seizures, it will be scary for us since she hasn't had any since a week after she was born. We've been talking about and decided that we still want the lumbar punctures if she can have them. We are just preparing ourselves mentally that she may have some seizures. The verse that God has been bringing to mind every since right before we left to come here is, "God has not given us a spirit of fear, but of power, and love, and a sound mind." We know that God has brought us this far and He doesn't want us to fear what may happen. He is in control and we will entrust Him with the all the side effects and results.

To close out this post, here is the very first picture that I have ever taken of Sierra smiling. This was during her therapy. Sierra seems to like movement a lot. The only smiles we have gotten out of her have been related to movement. 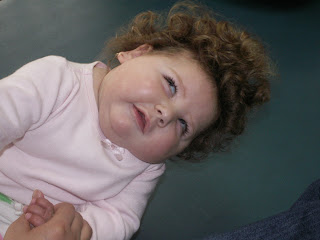 As a side note, when we were in Beijing, we had these annoying college preppie girls who complained all the time. Once they asked me what the word for oil was, so I told them. They then complained to the staff that the food was too oily. HA! The staff assured the women that they could get them some food without oil. The babysitter then explained to her why they weren't getting what she was saying.

And they have Wal-marts there. ;)

You guys are in my prayers.

thanks for the updates...you guys are awesome bloggers...God bless you!!
Steve & Gina

I am enjoying reading your blogs & praying for a miracle! Thank you for the updates!

Another wonderful update. Thinking and praying for all three of you.

What a great smile.